Ruling The Planet (But Only On Occasion)

There are moments in this Earth where it seems that I'm in charge of the planet. Not for important stuff like world peace or clearing traffic, but little things like making celebrities say out loud what I've thought up in my head. Maybe it's a massive coincidence if you like, but there have been the odd occasions where I've gotten the weather to obey me!

This realization fully came to pass after seeing the trailer for a movie called Bright Star over the last four or five months, practically each time I went to see a movie in the cinema. (It's finally running in theaters this week!) It's about the poet John Keats (played by Ben Whishaw), his romantic muse Fanny Brawne (Abbie Cornish), and their relationship that inspired some of the prettiest verse known to mankind, but doomed by poverty and Keats' consumption. Normally, this sort of movie would be so right up the Details Later alley that it should own real estate, but each time trailer came on (over and over), I always all,"[shrug]… Eh."

I'm sure Ben Whishaw is a great actor, and another in a long line of rising British thespians who are destined to impress us in various classical roles or (of course) as the villain in American big-action movies. (He kinda already did as the murderous lead in Perfume.) But I'm still not over that he got cast as Lord Sebastian Flyte in the 2008 film adaptation of Evelyn Waugh's Brideshead Revisited. Ugh. He simply not pretty enough or charismatic enough to play this rich role of a hilarious, ambisexual, filled-with-Catholic-guilt aristocrat with a stuffed bear named Aloysius who enchants wide-eyed, middle class fellow Oxford freshman Charles Ryder (played by Matthew Goode). The movie's casting director really got it wrong, because the very pretty and rebellious Matthew would've been the perfect Sebastian for the 2000s, and I think Whishaw would've gone to town as the eager-to-be-dazzled Charles.

Here comes the ruling the planet part: It turns out Matthew Goode, in the midst of promoting awards-season contender A Single Man, recently told the The Daily Telegraph the very same thing (with bonus, Sebastian-tastic dissing of Mandy Moore, and his roles in Watchmen and Leap Year):

In Brideshead he played Charles Ryder, who’s rather more bisexual than he likes to admit. Yet this, alas, was another film that made Goode’s heart sink when he watched it. ‘I got f----- over,’ he says disarmingly. ‘By the script and by what happened with everything else, because there was just nowhere for me to go as the character. I don’t think it necessarily helped that Ben [Whishaw, who played Sebastian Flyte] went down the path of making it so…’ Goode breaks off – but when I say ‘Dour?’, he does not demur. ‘Still, you know, it’s a film. It’s fine. I can sleep at night now. But I do think that Julian [Jarrold, the director] should have given Sebastian to me.’

I'm taking this statement as proof of my planet-ruling ways, or that I've had a mind-meld with Matthew Goode. Either way: Win!

It would've been great to see Matthew follow in the footsteps of Anthony Andrews, who played Sebastian Flyte in the landmark 1981 miniseries version. (A young Jeremy Irons played Charles Ryder!) The role made Anthony a star in the 1980s, and Jeremy Irons forever remained an indelible presence in British cinema (with Oscar glory to come eventually). 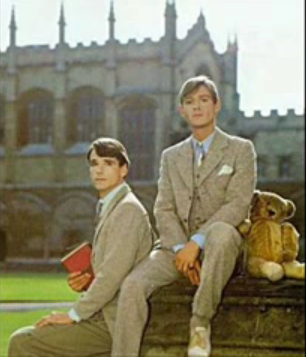 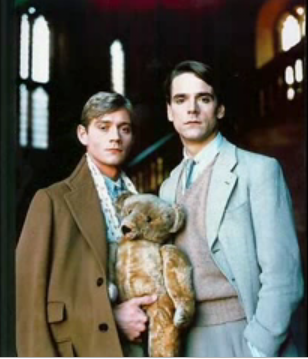 I remember watching all 12 hours(!) of this miniseries back in the days of videotape rental years, years after it was first broadcast, and myself getting a Ryder-like enchantment of 1920s British glamour, a pre-cursor to all the Anglo-philia that fueled most of the 1980s.  The setting and clothing of Brideshead is the stuff of Ralph Lauren dreams. I'm convinced that Lauren wouldn't have the success he's had without this miniseries. (And talk about star power: this show had both Laurence Olivier [as Sebastian's father] and John Gielgud [as Charles' dad]). The Brideshead theme is staggeringly beautiful and compelling (and instantly makes me feel 13 years old all over again):


Cue: Paula, me (and Sandy and Kara when they were up to it, because we could twist their arms sometimes) filling our summer days watching Sebastian summon Charles from London to the Brideshead estate because Sebastian wrote he was "dying", but alas the cause was only a broken toe. (Charles: "I thought you were dying!" Sebastian: "I thought so too! The pain was excruciating.") Paula and I repeated dialogue like this ("Oh Charles, don't be so Jesuit-tical!") and crack ourselves up each and every time. (I cracked up right now just typing it!) Check out the hilarity for yourself (so worth it!):

It was only when I read the actual novel years later that Brideshead Revisted was a profound story about faith, and devastatingly sad. The recent remake could've brought this story to life for the 21st century, but a dour Sebastian and a too-pretty Charles just weren't going to cut it.

Oh well. At least Brideshead Revisited taught me how to pronounce "Aloysius."
Subscribe