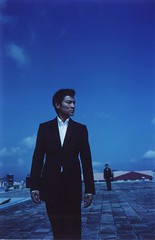 I bet my photos aren't working again. Or is it? Is Andy Lau here?

Here it is upon us, the American version of Infernal Affairs called The Departed, directed by Martin Scorsese. When I first saw the Hong Kong version, it was so good it made talk a lot. (And I already talk plenty!) I just couldn't shut up what a great movie experience it was. Movie fanatic that I am, it is actually rare  for me to have an out-of-body, damn-this-is-a-good-movie sensation inside a theater, and this was one of them. I keep trying to re-live that experience each time I buy a movie ticket, but it doesn't happen as much as I want to. Even with movies with actors I deeply adore in it. Maybe for key moments in a story, but the all-the-way-through ones I can count on one hand.

Infernal Affairs is the story of  two moles, deep undercover (Andy is a mobster who's infiltrated the ranks of the cops, Tony Leung Cheu-Wai, a policeman taking on the Triads) for nearly 10 years. Tony understandably wants out, the ugliness of his task weighing heavily on his psyche. Andy wants to stay in--he's a smart cop who's life is coming together with a new promotion, new digs and he's newly engaged (to Sammi Cheng, so their chemistry is like gangbusters. Oops. Bad pun. Their chemistry feels genuine).  During a failed drug bust (truly one of the best action set-pieces EVER. The suspense won't let you breathe) it is apparent to both our protagonists' bosses (Eric Tsang, Anthony Wong) that a stooge is in their midst. Now Tony and Andy are tasked to smoke each other, and in a way, themselves, out.

In 90 minutes, Infernal Affairs plays out this story with depth, tackling identity and destiny with insight and  twists that punch you in the gut. It's a perfectly formed, almost geometric creation that wastes no energy, no moment. That this was done with a minumum of violence speaks to the movie's exquisite greatness. (Well, the psychiatrist played by that Kelly actress girl should've been played by someone else. Good thing her buzzkill wasn't enough to affect the movie.) A fandom was born: Andy and Tony gave such superb performances that I inhaled about 20 of their movies in the last two years.  Don't get me started on the sequels. Infernal Affairs III is a complicated puzzle, but boy did it pull out the rug from under me. I was gutted by its very last scene. Ouch.

It's no surprise then, the IA got picked by American producers for a big, splashy remake. Well, big and splashy it was. I was frightened when Martin Scorsese got the call to direct the movie. He is SO the opposite of perfectly formed, almost geometric. He's usually sprawling  and leisurely (that's not the word I'm looking for. But you get the drift).

True enough, The Departed is like a ginormous SUV  to Infernal Affairs'  sleek roadster. If you haven't seen the Hong Kong version, The Departed is actually quite enjoyable.  It was obviously made with care, the dialogue has lots of amusing moments, Leonardo Di Caprio (in the Tony Leung role) has finally returned to his lean, spare acting style (almost. There's a chewy  moment here and there) and and the always-premium Matt Damon (as Andy Lau), especially in the earlier part of the movie, shows the viewer (or just me) something he hasn't shown before: all-out charm. (Could his next movie be a cutesy rom-com? The adorable-ness would be off-the-charts.)

What's missing though, is the pathos (Karen's abused word of 2006) and desperation of Leo's and Matt's predicament. Instead, loads of movietime is spent on Jack Nicholson's gangster. Yeah, the evil behemoth that needed to be brought down and propel the movie forward, but the movie became all. About. That. He hijacks the story, and we learn over and over and over and over again that he is a Nasty Man. He's bad, okay?!!! Instead of confronting the crisis of redefining identity, it's how do we stop the heinous monster that is Jack?

Then there's the awkward plot development of the girl who comes between Leo and Matt (Vera Farmiga's is appealing, but her character makes me furrow my brow), the shocking violence, the two-hour-and-a-half running time (seriously!) and the very final frame of the movie. That gutted me with its LAME-O-SITY. Did the acclaimed Martin S really think that would great? Dude. No. 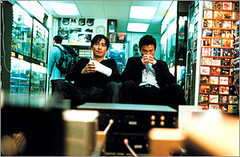 One thing that Matt and Leo have it better in The Departed? There's no way the two leads would ever sing the movie's theme song, like Tony and Andy did. I confess with no shame though, that the Infernal Affairs' theme is catchy as (eternal) hell.
Collapse